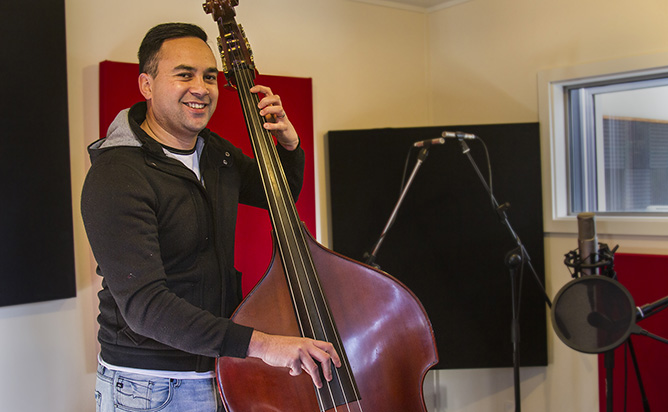 His earliest memories were of his whānau jamming after dinner. "Right from a young age I remember we'd get together for a meal and it always ended with the aunties and uncles getting out their guitars. Very quickly you want to know how to play along with them."

Clayton's parents fostered his interest in music, hiring him a guitar for $10 a term until he'd saved enough pocket money to buy his own.

Despite limited resources and a culture of under-achievement at his high school, Clayton achieved his goal of becoming a professional musician. Today he performs with other musicians, writes and records film music and advertising jingles in his home recording studio, and teaches music to dozens of school children every week. "Going as far as I could with music was always the plan."

Clayton's inspiration and motivation came first from his older brother (who went to CPIT's music school several years ahead of him) then from his high school music teacher and fellow CPIT music graduate, Mike Fudakowski. The latter blew Clayton's mind with his custom-made eight-string bass guitar.

"He changed my perspective on what a bass guitar was capable of," Clayton says. "He showed me how bass could become a lead instrument, not just an accompanying instrument. He really showed me a lot of techniques that I didn't know were possible. When you see somebody who pushes the boundaries like that, it inspires you."

When he started his degree at CPIT, Clayton wasn't especially keen on jazz. "I could listen to pop songs on the radio and pick the chords and work it out by ear. With a jazz song I was completely lost. It's complex but jazz forces you to actually know what you're doing." By the end of his second year at CPIT, Clayton was sufficiently skilled in jazz to be able to turn up to work as a session musician and play on demand.

As for being a role model to the kids he teaches now, Clayton says: "I guess I'd like to think so. I never got myself into too much trouble and I always worked hard for what I wanted to do in life."